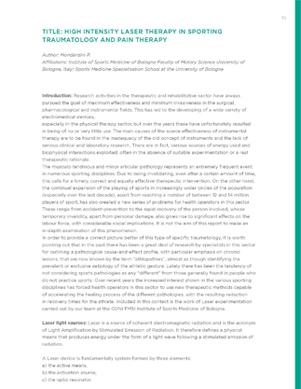 There was a surprising improvement in the anatomo-pathological situation.

Research activities in the therapeutic and rehabilitative sector have always pursued the goal of maximum effectiveness and minimum invasiveness in the surgical, pharmacological and instrumental fields. This has led to the developing of a wide variety of electromedical devices, especially in the physical therapy sector, but over the years these have unfortunately resulted in being of no or very little use. The main causes of the scarce effectiveness of instrumental therapy are to be found in the inadequacy of the old concept of instruments and the lack of serious clinical and laboratory research. There are in fact, various sources of energy used and biophysical interactions exploited, often in the absence of suitable experimentation or a real therapeutic rationale.

The musculo-tendinous and minor articular pathology represents an extremely frequent event in numerous sporting disciplines. Due to being invalidating, even after a certain amount of time, this calls for a timely, correct and equally effective therapeutic intervention. On the other hand, the continual expansion of the playing of sports in increasingly wider circles of the population (especially over the last decade), apart from reaching a number of between 12 and 14 million players of sport, has also created a new series of problems for health operators in this sector. These range from accident-prevention to the rapid recovery of the person involved, whose temporary invalidity, apart from personal damage, also gives rise to significant effects on the labour force, with considerable social implications. It is not the aim of this report to make an in-depth examination of this phenomenon.

In order to provide a correct picture better of this type of specific traumatology, it is worth pointing out that in the past there has been a great deal of research by specialists in this sector for outlining a pathological cause-and-effect profile, with particular emphasis on chronic lesions, that are now known by the term “athlopathies”, almost as though identifying the prevalent or exclusive aetiology of the athletic gesture. Lately there has been the tendency of not considering sports pathologies as any “different” from those generally found in people who do not practice sports. Over recent years the increased interest shown in the various sporting disciplines has forced health operators in this sector to use new therapeutic methods capable of accelerating the healing process of the different pathologies, with the resulting reduction in recovery times for the athlete. Included in this context is the work of Laser experimentation carried out by our team at the CONI FMSI Institute of Sports Medicine of Bologna.

Symptomatological regression with disappearance or reduction of any functional deficit – 294 subjects (72.6%). Attenuation of the symptomatology and functional deficit 60 subjects (14.8%). Persisting of the s symptomatology and/or functional deficit – 51 subjects (12.6%). Each subject was assessed a second time at least 10 days after the end of the treatment without the onset of any relevant negative modifications of the clinical situation present at the end of therapy test. It is evident that the treatment with HILT is highly successful with regard to the clinical-symptomatological situation. We wish to stress however one fact that emerges from the NMR and/or X-ray, and ultrasound assessment of the patient, and namely, that in a high percent of cases there was a surprising improvement in the anatomo-pathological situation especially in the phlogistical alterations and the chondral lesions. This only further reaffirms the postulated metabolic stimulation effects of high intensity Laser.