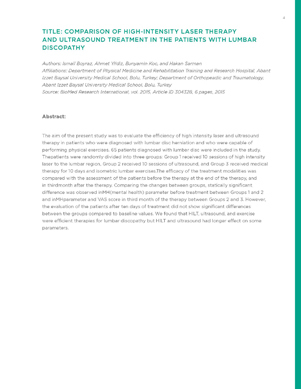 We found that HILT, ultrasound, and exercise were efficient therapies for lumbar discopathy but HILT and ultrasound had longer effect on some parameters.

The aim of the present study was to evaluate the efficiency of high intensity laser and ultrasound therapy in patients who were diagnosed with lumbar disc herniation and who were capable of performing physical exercises. 65 patients diagnosed with lumbar disc were included in the study. The patients were randomly divided into three groups: Group 1 received 10 sessions of high intensity laser to the lumbar region, Group 2 received 10 sessions of ultrasound, and Group 3 received medical therapy for 10 days and isometric lumbar exercises. The efficacy of the treatment modalities was compared with the assessment of the patients before the therapy at the end of the therapy, and in third month after the therapy. Comparing the changes between groups, statically significant difference was observed in MH (mental health) parameter before treatment between Groups 1 and 2 and in MH parameter and VAS score in the third month of the therapy between Groups 2 and 3. However, the evaluation of the patients after ten days of treatment did not show significant differences between the groups compared to baseline values. We found that HILT, ultrasound, and exercise were efficient therapies for lumbar discopathy but HILT and ultrasound had longer effect on some parameters.