Reduces use of medication 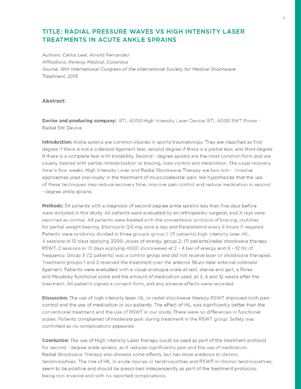 High Intensity Laser reduces significantly pain and the use of medication.

Ankle sprains are common injuries in sports traumatology. They are classified as first degree if there is not a collateral ligament tear, second degree if there is a partial tear, and third degree if there is a complete tear with instability. Second - degree sprains are the most common form and are usually treated with partial immobilization or bracing, load control and medication. The usual recovery time is four weeks. High Intensity Laser and Radial Shockwave Therapy are two non – invasive approaches used previously in the treatment of musculoskeletal pain. We hypothesize that the use of these techniques may reduce recovery time, improve pain control and reduce medication in second - degree ankle sprains.

34 patients with a diagnosis of second degree ankle sprains less than five days before were included in this study. All patients were evaluated by an orthopaedic surgeon, and X rays were reported as normal. All patients were treated with the conventional protocol of bracing, crutches for partial weight bearing, Etoricoxib 120 mg once a day and Paracetamol every 6 hours if required. Patients were randomly divided in three groups: group 1: (11 patients) high intensity laser HIL, 4 sessions in 10 days applying 3000 Joules of energy, group 2: (11 patients) radial shockwave therapy RSWT, 2 sessions in 10 days applying 4000 shockwaves at 2 - 4 bar of energy and 6 – 12 Hz of frequency. Group 3 (12 patients) was a control group and did not receive laser or shockwave therapies. Treatment groups 1 and 2 received the treatment over the anterior fibulo-talar external collateral ligament. Patients were evaluated with a visual analogue scale at rest, stance and gait, a Roles and Maudsley functional score and the amount of medication used, at 3, 6 and 12 weeks after the treatment. All patients signed a consent form, and any adverse effects were recorded.

The use of high intensity laser HIL or radial shockwave therapy RSWT improved both pain control and the use of medication in our patients. The effect of HIL was significantly better than the conventional treatment and the use of RSWT in our study. There were no differences in functional scales. Patients complained of moderate pain during treatment in the RSWT group. Safety was confirmed as no complications appeared.

The use of High Intensity Laser therapy could be used as part of the treatment protocol for second - degree ankle sprains, as it reduces significantly pain and the use of medication. Radial Shockwave Therapy also showed some effects, but has more evidence in chronic tendinopathies. The role of HIL in acute injuries or tendinopathies and RSWT in chronic tendinopathies, seem to be positive and should be prescribed independently as part of the treatment protocols, being non-invasive and with no reported complications.